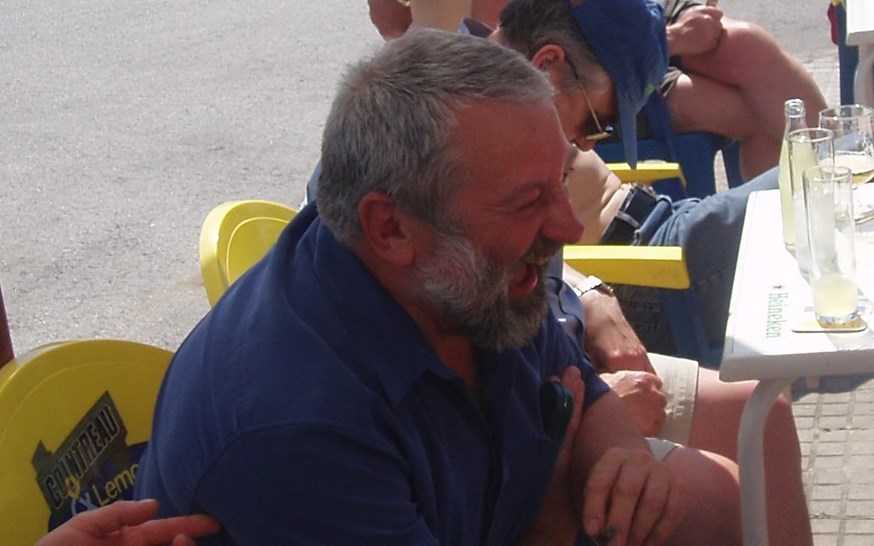 It is with the greatest sadness that the club has to record the passing of Tim Slater, aged 72, who died at home on Thursday 30 April with his family at his side. In his six decades at the club Tim was a one off - an outstanding player from the mid-1960s to early 1980s, who also held numerous committee positions up to and including chairamn and being a great club President, 2005-2013, and a talented entertainer who organised a series of memorable club tours and events. But more than that, Tim was simply the biggest character in the history of Pocklington rugby.

Tim came from a family steeped in rugby at Percy Road; his father Pip, and uncle Jim Hessle, being first team vice-captains in the '30s and '40s. And Tim followed in their footsteps to the club while still at Pocklington School, where he was an exceptional all-round sportsman - rugby player, cricketer and athlete, with his remarkable 22 foot long jump in 1966 the school's longest standing school record.

A degree in classics at Oxford followed. There were some who felt he should have been in line for a rugby blue; but his style did not suit the authorities so he decamped to play for Stow on the Wold RUFC where he had family connections, while still making an impact at Percy Road when back home in Pocklington.,

After being an even-time teenage flying machine, he changed modes in the early 1970s to become a wing than ran over opponents instead of past them. He continued to be a prolific first team try scorer, with a season's best of 24 touchdowns in 1972-73, and useful toe-end back up goal kicker, for another decade, then continued as an inside back in the lower teams until arthritis finally got the better of him.

From his earliest days at the club he was organising and entertaining. He ran Pocklington's first quiz nights, he conceived Pocklington's first public BBQ (over 2,000 people attended), and a whole series of other memorable social events followed, including a unique 'Riverboat Shuffle' on the Humber ferry. A talented impromptu pianist, he led the singing in the clubhouse and also wowed audiences across Europe with his jazz and blues renditions. His erudite match reports in local newspapers, often with Latin quotes or passages from the classics, were stuff of legend.

But he was both exceptionally creative and highly organised, performing further valuable service as club statistician and membership secretary. For 30 years his wit shone through as the Pock 7s announcer and commentator on Good Friday, and as the MC at club dinners, while as half of 'Les Deux Tims' he led Pocklington on a series of outstanding and meticulously planned club tours to France and beyond (he is pictured in happier times on tour in Barcelona in 2005).

Tim has suffered an increasingly debilitating illness for several years, which was both steadfastly borne and cared for. His last appearance on the touchline at Pocklington, in a wheelchair for the West Hartlepool game in February, was a worthy effort and event for all concerned.

Tim was also a devoted family man, who became as big an an institution at Wressle as Pocklington from the mid-1970s onwards. With typical creative invention he brought his two domaines - rugby and village - together every summer for the Wressle Mile. He was also a big personality in York, where he worked as a railway surveyor.

Our thoughts go out to his wife Jane, whose care and dedication to the last has been incredible, and to daughter Suzy and son Robbie, who also followed him in wearing a Pocklington winger's shirt.

Tim's funeral at Wressle on Monday 11th May at 3.00pm is restricted to immediate family, but there will be many of his friends joining the family in spirit and raising a glass to his memory. Typically, Tim left detailed plans for his passing and a memorial service will be held at a later date.

Tim Slater will be much missed, never fogotten and never replaced.