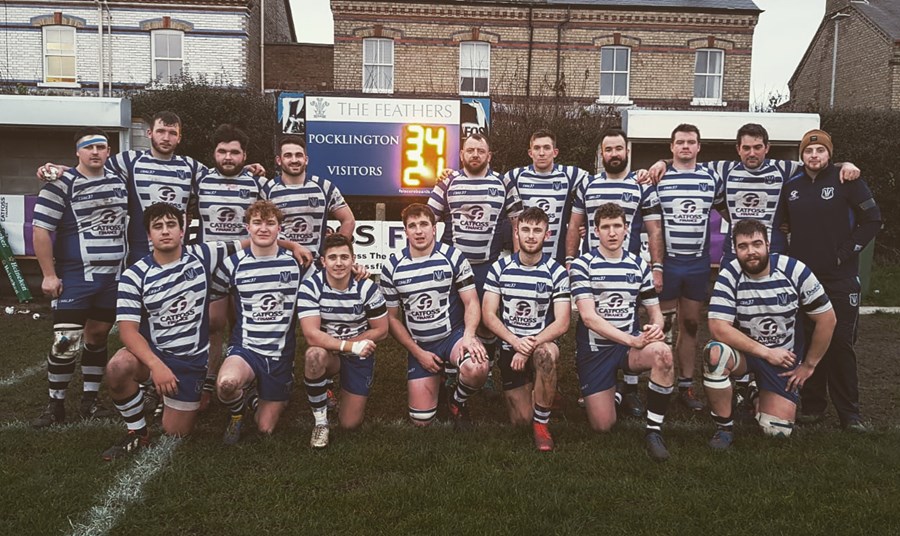 Pocklington RUFC 1st XV's 2019-20 turned out to be a real roller coaster ride, starting poorly, flirting with relegation in mid-season then ending on a high to finish in the top half of the league.

Pocklington's dramatic, last gasp victory away to second placed Cleckheaton proved to be a grand finale that took them to seventh in the table - their best standing of the campaign. And if all rugby had not been brought to a premature end, Pocklington could easily have finished even higher as three of their last four games to come before the drawbridge was lifted were against sides they had beaten earlier in the year.

The upturn in results after Christmas was predictable. In the first 11 of their 22 games Pocklington used 40 players as selection chopped and changed every game due to injury and unavailability. In the next 11 the total grew to just 50 for the whole campaign. The threequarter line was the biggest problem as Pocklington's midfield was different week on week, until the successful conversion of Andy Little from back row to centre and the recovery of Tom Richardson alongside at last stablised the line.

If the back division had more changes than a fashion show, the front row was stability epitomised until the last few matches. Pocklington's experienced front row of Chris Morton, Jim Thornton and John-Paul Kelly pulverised their opponents game after game; until Morton's stature as the best loosed head in the league saw him spirited away to Otley to become another of the clutch of local lads currently performing in the semi-pro national leagues, and Thornton's term ended early through injury. Not only did the feared Pock pack provide the platform to initally survive and ultimately flourish, it also became a scoring machine. Of the 75 tries scored by Pocklington over the 22 games, 20 were touchdowns by front five forwards and another five came from penalty tries as the opposing eight shattered under the strain at scrum time.

After four opening league defeats, moving Christian Pollock to fly half after a month gave Pock greater kicking length and more territory to hurl the pack at the tryline. The improvement brought a last play win over Driffield and was a prelude to a series of cliffhanger finales - in a dozen games Pocklington won or lost or grabbed a crucial bonus point in the dying seconds. The ability to accumulate bonus points for both narrow defeats and scoring four tries became so important in Pocklington keeping in touch with their relegation rivals when results went against them; and was the launchpad for the late leap up the league standings. Derby victories over Driffield and Malton were Pock's only successes in their first nine fixtures and had them rooted in the bottom three; but then four wins on the bounce, including away to the then league leaders Scarborough, dragged them out of the drop zone and up to ninth in the 14 team table by Christmas.

Although the team selection became more settled into the new year, performance and results continued to fluctuate. And with North 1 East becoming ever more tighter, Pocklington were one of eight clubs all scrapping to not be in the third relegation spot into the last month of the campaign. The two bonus point wins in their last two encounters put all thoughts of going down behind them and briefly wetted the appetite for more success until the early closure.

While there were some 20 players in action in the first third of the season who fell by the wayside due to injury or new or increased work committments; a number of core individuals had their best campaigns by a distance. In addition to the front row union, locks Josh Papa, Kym Russell and Archie Fothergill put in big shifts in the engine room and contrubuted ten touchdowns between them. At flanker Nathan Smith shone at the breakdown and tackle and Ed Davison improved all round and scored some important tries.

On the individual scoring front Pollock's goalkicking was much more consistent and he led the way with a 230 point haul. It included eight touchdowns to be top of the try charts jointly with fellow halfback David Davison, just one ahead of juggernaut No 8 Marcus Britland.

While Pocklington could be pleased with their final position in the league, and heartened by the number of yoiung players that came through, they should really have been in the top half throughout. Several games were lost that were there for the taking, the challenge going forward will be to build a more settled squad, then for it to develop the application and consistency to win close games more regularly, not just derbies and finales.