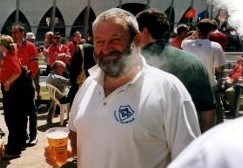 Tim Slater's funeral is next Monday 11 May, but has to be restricted to immediate family. A memorial service will follow in due course, We are devasted that we cannot be there to show our support, however, the club wants his friends to be with the family in spirit on the day. We are asking for everyone to 'raise a glass to Tim' at 6.00pm on 11 May, preferably wearing a club tour shirt or tie, and take a photograph of themselves, then email it to raiseaglass2tim@icloud.com so that they can be collated into a montage to his memory.

While the rugby club was a big part of his life, Tim had a wide range of other sports, interests and talents, including literature, music, horticulture, travel, dialect poetry, ornithology, gastronomy, ancient history and country pursuits; and worked for over 30 years at York as a surveyor for British Rail and associated companies. He was also as big an institution at Wressle, where he had lived since the 1970s, as he was at Pocklington.

Anyone from his many other walks of life is welcome to link with Pocklington RUFC in our virtual tribute and contribute a photo of themselves at 6pm on 11 May joining in with 'raise a glass to Tim'.