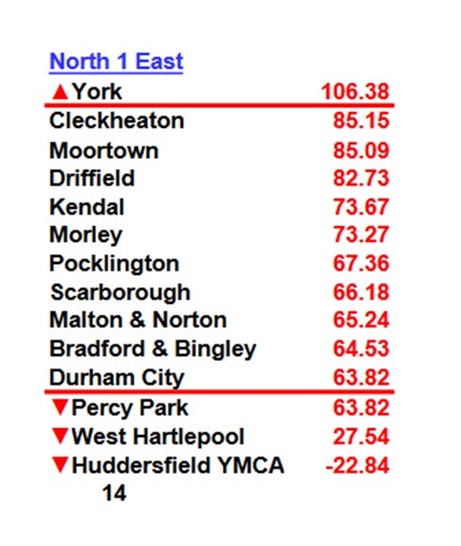 The RFU formula for finalising the uncompleted rugby programme’s promotion and relegation issues throughout the league pyramid has confirmed Pocklington’s seventh place finish in North 1 East.

It was a tight run thing. Pocklington’s bonus point victories gave them ten points from their last two games to leap them up the table. But only three and a half points finally separated Pocklington in seventh and relegated Percy Park in 12th. York clinched the title early, while Huddersfield YM and West Hartlepool were already doomed; but with any one of half a dozen clubs fighting against the drop to the death, Percy Park can count themselves somewhat unlucky to be the one relegated on the press of a calculator’s button.

North 1 East looks likely to be similarly competitive in 2020-21. Coming back down are Ilkley and Morpeth, who won N1E in 2016 and 2019 respectively, while heading up are Consett, the Durham/Northumberland champions for two of the last three years, and the Halifax based pair of Brodleians and Heath, who have been knocking on the door for a couple of years.

Subject to there being no clubs folding or level transferred, and with Kendal expected to go back west; the newcomers will line up next season alongside Pocklington, Cleckheaton, Moortown, Driffield, Morley, Scarborough, Malton & Norton, Bradford & Bingley and Durham City.