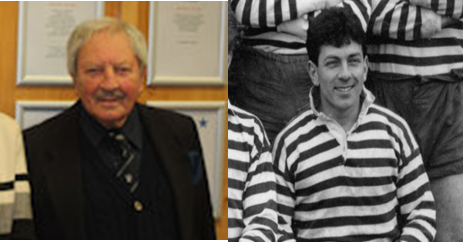 Former Pocklington RUFC player, parent and grandparent, Bill Fletcher, passed away on Saturday evening, just a few hours after the Pocklington v Driffield match. A celebration of his life is on Monday 4 November, details below.

The timing of his passing was ironically sad and notable as Bill had played for both Pocklington and Driffield. A Cumbrian by birth and upbringing, Bill came to Pocklington via St Johns College. He arrived in the East Riding in 1958 to teach P.E. at the newly built Woldgate School and it became his one and only appointment as he gave thousands of local youngsters their early grounding in sport over the next 30 years at Woldgate.

As a rugby player he spent a decade as a jinky Pocklington fly half Pocklington, frequently alongside pupils and former pupils. He was one of the group of players who got the Good Friday 7s up and running, and he also served on the club committee before moving on for a sojourn at Driffield RUFC. His son Mark also played for Pocklington in the 1980s and Bill reconnected with the club when his grandson, Jack, became the third generation of Fletchers to represent Pocklington. In recent years he has been one of the club's most regular supporters, home and away. He is pictured above in a Pocklington shirt in 1963 and sporting his Pocklington club tie at Woldgate's 60th anniversary celebrations last October.

Our condolences and thoughts are with his family. A service will be held to celebrate Bill’s life at the Methodist Church in Chapmangate, Pocklington, on Monday 4th November at 1pm., followed by refreshments at Barmbyfields Barns, Keldsprings Lane, Barmby Moor.